The Increasing Need for a Complete Multilingual Presence Online

The first step should involve the creation of an international business marketing strategy. This should include everything necessary for a multilingual digital marketing campaign, including website translation, multilingual social media marketing, video marketing campaigns and localization strategies to ensure a personal and direct connection with the target demographic, national or international. Your international business marketing strategy should also include the services of a translation company specializing in localization services and a professional social media campaign service in some cases.

ECommerce sales in the United States alone enjoyed almost a fifty percent increase in April of 2020, thanks in large part due to the ongoing Covid-19 global pandemic. Grocery sales online saw an increase of over 100 percent, book sales online increased 200 percent and electronic gadget and device sales online increased by a mere 58 percent; all this according to an article posted by Tech Crunch on 13, May of 2020.

Mind you, these numbers are for sales within the United States alone, and often noted to be due in no small part to the somewhat draconian isolation and quarantine measures being put in place. How often though, have you heard the term referring to “the new normal”?

More and more people are working from home, either as remote service providers or as work-from-home employees for companies that are moving into the digital realm. Businesses that were already operating online were likely not adversely impacted by the coronavirus crisis, while more traditional businesses were closing their doors left and right.

Even now we hear some concerns from cities that their downtown area will resemble Sunday every day of the week as more businesses and their employees move online and commute, working in traditional closed office spaces less frequently.

Add in the numbers still coming in from organizations such as the World Trade Organization, the World Bank and even the International Chamber of Commerce and the importance of an international, multilingual digital marketing campaign should be readily apparent.

The World Economic Forum points out that the “work from home economy” is now in full swing and is not merely some passing economic phase. “Consumer preferences have been shifting toward e-commerce and online entertainment and education for over a decade. The COVID-19 pandemic, however, has been a boon to companies that serve the stay-at-home economy, which is displaying agility by simultaneously experimenting with new ideas to build brand affinity.”

Perhaps most notable of all is the fact that an average of 60 percent of online consumers are willing to purchase from foreign vendors. Alas, there is also a catch.

People are more than willing to act globally in the form of purchasing from foreign vendors, but they want to think locally. This may run contrary to the old adage of “Think globally. Act locally.” but we live in a brave new digital world where “the new normal” must be the focus of successful digital marketing strategies.

What that means in plain language is that people online are going to purchase from wherever makes them feel the most comfortable with their online purchase. Human nature is such that people will always look at things from a personal, localized view. People who are shopping online will purchase from foreign vendors but want to shop, review, read and converse in their own language.

Translation and localization services in conjunction with a multilingual social media marketing campaign can ensure the reader that the eCommerce vendor and other online influencers still see things from the localized perspective of the target demographic.

Translation and Localization in a Multilingual Digital Marketing Campaign

If you are going to pursue an international audience you will, of course, have to speak to them in their own language, but what exactly does that mean? Translation services can be challenging, not only because of the lexical limitations so often present but also because of the principles of localization strategies necessary to target the audience more directly.

Domestically speaking, there are 24 separate and distinct dialects of American English in the United States, including one that is not even considered to be American according to the BBC. “Native Americans, English sailors and pirates all came together on Ocracoke Island in North Carolina to create the only American dialect that is not identified as American.”

A translation company that specializes in localization will be aware of these linguistic quirks and be able to translate accordingly. Without the use of localization services, the translation could be ineffective completely or worse still, counterproductive, even sending your clients to the wrong location altogether.

It is important to note that translation is about much more than just changing one word into another from a different language. The translation is about translating that which was said completely, including the original context and content of what is said. Localization is the process that is used to ensure that the message is directed towards the target demographic effectively, completely, and with a personal touch.

How many communities are already bilingual or multilingual? In the Canadian province of Quebec, French and English are both common and official languages. Along the Southern border of the USA, Spanish and English may both be necessary, with anyone not speaking both languages suffering as a direct result.

While the average small business owner or digital marketing agency may see this as a barrier, it is in fact an amazing opportunity to increase your presence and your influence on social media and in terms of business branding and profitability.

Translation and Localization as an Opportunity and Marketing Tool

The entire concept behind localization strategies for a successful digital marketing campaign should be to create an opportunity to establish a more direct and effective business relationship with a larger target demographic.

Website translation and multilingual social media marketing are certainly ways to attract the more international audience, but how do you reach their hearts?

How do you as a business owner wherever you are, establish a personal and emotional relationship with the target demographic to gain their trust, ensure them that you understand their personal needs and can offer them a personal gain based on their perspective?

In other words, how do you close the deal?

How do you brand your business online, establish a customer base and ensure customer loyalty? The answer? You make translation and localization a part of everything from your marketing content to your social media marketing campaign.

As part of the larger picture, localization strategies move far beyond the realm of language and translation services. Think for a moment about the most exotic location you have ever dreamed of visiting. Does it bring to mind memories? While it may create an emotional reaction, it does not engage the part of the brain that holds memories or that will evoke a more personal and direct emotional response.

What if however, you introduce local landmarks and other local features at the local level? Localization will depend on the scale of course, though it works equally as well at the state, provincial or even local city or township level.

Does your foreign language social media marketing campaign use pictures? In some languages, a picture of people grilling a steak may be fine while in others it would be deemed offensive. Pictures of that Hawaiian Luau? Great in some locations but pretty bad in others.

Just as there is a good cause to use a professional social media marketing platform, there is every reason to look for a translation company that specializes in localization services. Localization strategies must focus on local and national cultural standards and historical backgrounds if they are to provide professional marketing help for small business owners.

Localization strategies should be part of the entire digital marketing campaign from multilingual social media marketing to website translations to localized google and facebook ads. The larger the target market, the more broad the localization should be.

The more personal and precise the target market is, such as in a geographically based Google ads campaign for instance, the more directly the localization efforts should be focused. This principle should also be used for your multilingual social media marketing campaign at the same time. 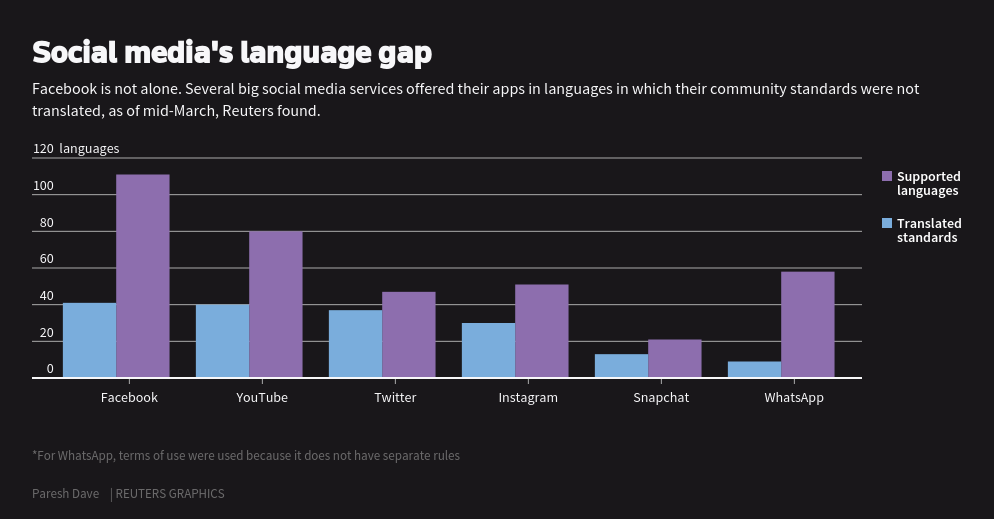 According to a recent report by Reuters News Agency, Facebook currently supports 111 languages. “Facebook’s 15,000-strong content moderation workforce speaks about 50 tongues, though the company said it hires professional translators when needed. Automated tools for identifying hate speech work in about 30.”

“‘Machine learning requires massive volumes of data to train computers, and a scarcity of text in other languages presents a challenge in rapidly growing the tools’, Guy Rosen, the Facebook vice president who oversees automated policy enforcement, has told Reuters.” Thus, translation companies must often be used in order to fill in the gaps where automated translation services are not readily available.

Twitter supports roughly 35 languages. Google supports more than 100 languages. Why? Because people who are using these services are going to view, browse and share data, stories, videos and product reviews in their own languages.

The Benefits of Translation, Localization and Professional Social Media Marketing

How much of your potential market are you missing as a small business owner? How can your small business benefit from a professionally managed multilingual social media marketing campaign? What are the benefits of these campaigns for internet marketers? Are there any benefits for the local business owner providing local services within the local community?

The answer to all of these questions is a resounding yes.

Translation and localization, not only as part of a successful multilingual social media marketing campaign but as part of the entire digital marketing strategy can show very tangible results. These results may take some time to appear but when properly managed, the business benefits can be both immediate and long lasting.

What is the benefit of using a professionally managed, translated and localized multilingual social media marketing campaign? Are a few billion potential new customers give or take a few hundred million enough incentive? Just in case that is not enough for the average small business owner moving online, there are additional benefits as well.

According to the United Nations Educational, Scientific and Cultural Organization or UNESCO, “98 percent of the internet’s web pages are published in just 12 languages, and more than half of them are in English.”

In short, if the small business owner seeking new markets online can use translation and localization to increase their social media influence and their presence online, they are going to greatly reduce the level of competition in many ways.

All of the marketing content translated and localized will have substantially fewer competitors in the search engines, resulting in higher domain authority and web ranking for the online business owner. Increased visibility on the search engines means increased traffic for the website.

Professionally managed multilingual social media campaigns will have fewer competitors on social media sites, resulting in an increase of shares among native speakers of the additional languages. Increased numbers of shares and interactivity on the Social Media sites results in more visibility for the small business owner, more brand recognition and ideally, an increase in sales.

Now think about the reach of the video that ranks well for all of its related keywords, not only in English but in other languages (with much less competition) at the same time.

At Social Hire, we don't just do social.

Our digital marketing managers are the wizards that can give you the insight you need to develop your business. Have you had enough of making complex personnel choices that don't work well for your digital presence?

We're an organisation that helps our clients boost their social media presence by providing social media marketing on a monthly basis.

You might like these blog posts Top 5 Highest Paying Social Media Jobs, The Importance of Building a Mailing List for Digital Marketing, 18 Social Media Stats You Need to Know Right Now in 2018, and Common Mistakes Businesses Make With Social Media Marketing.

Back to Small Business blogs